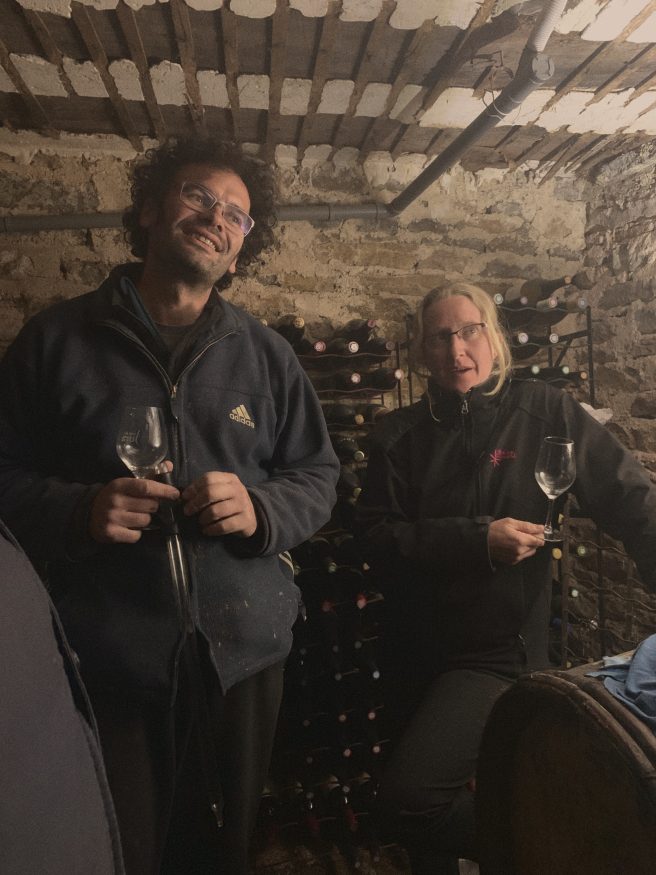 Amélie Vuillet and Sébastien Jacques are both natives of the Jura. Between them they have worked alongside some of the region’s great vignerons in Brignot, Bornard and Tissot. In 2011 they acquired a tiny parcel in Arbois and began making a small amount of wine for themselves and since 2013 they have sold a little of it to a lucky few. Today they farm just over a hectare of vines spread over tiny parcels around their home in Molamboz, as well as in Arbois and Montigny-lès-Arsures.

Their work in the vineyards displays the utmost respect for nature. They rarely use treatments and work the soil on horseback with a real focus on the plant’s development. Likewise, in the cellar they work with gravity and without temperature control, filtration or any additions in the hope of offering as pure a reflection of place as possible.

These beautiful, vivacious wines are truly one of a kind.

A blend of equal parts Savagnin and Chardonnay from clay-limestone soils in Montigny-lès-Arsures. The grapes were destemmed and macerated separately for ten days, before being pressed and assembled into vat for six months of élevage. The resulting wine is incredibly perfumed, with delicate aromas of citrus and minerals and just a hint of tannin.

A blend of equal parts Ploussard, Trousseau, Pinot Noir, Chardonnay and Savagnin. The fruit comes from old vines planted over clay and limestone in Montigny-lès-Arsures, with the balance coming from a younger parcel in Molamboz. The grapes are destemmed and the wine spends three months on skins, before being pressed off to age in cuve for a year. A warmer vintage has produced dark, thrilling wine with a complex palate of wild black fruits.

Mostly Ploussard, with the balance coming from Pinot Noir, Gamay and Trousseau. The fruit comes from a fifty year old parcel planted over clay and limestone in Montigny-lès-Arsures. The grapes are destemmed and the wine spends a month on the skins with no pigeage, before being pressed off to cuve for a year. This impresses with an incredibly exotic nose thick with spice and some neat little tannins to boot.