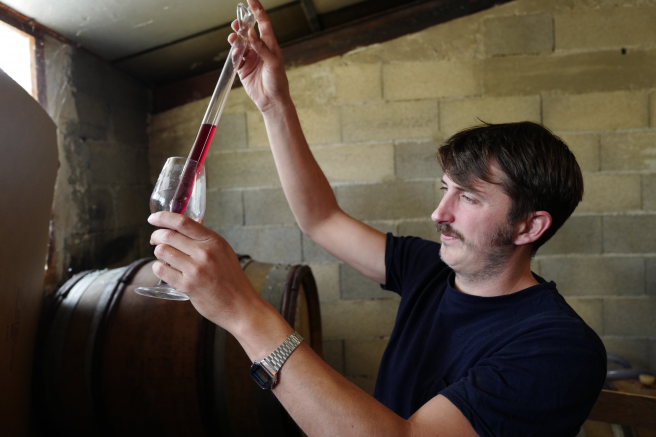 We are very happy to announce that we are now working with Sebastian Chatillon of Ad Vinum.

Seb’s first vintage is a collection of wines made from rented parcels and fruit grown by friends in and around his new home of Vallabrix in the Gard. They are made from a dizzying variety of grapes and terroirs and the way he has attained balance, life and continuity in each of the wines despite this suggest a very bright future indeed.

The wines were amongst the most vibrant and impressive on show at both La Dive Bouteille and the Spring Tasting and we are very excited to finally have them on the way to London. You are probably wondering who he is is, so we’ll let him tell you in his own words…

‘I am from Normandy. I was young, was in the punk movement and found myself in business school. After a few years I was bored with school and had no idea what to do with my life. Every Saturday a friend and I would finish partying at 5 o’clock in the morning and end up in his dad’s cave drinking wine. After a while I thought to myself, if I am going to drink wine at 5 o’clock in the morning maybe I should learn how to make it.

At the beginning I spent ten days in a big, shitty, chemical vineyard in the Loire before René Mosse asked me to come and work at his domaine. It was supposed to just be for a couple of weeks, but I ended up staying four years. I learned how to work in the vineyard and and discovered natural wine. It was fresh, different and in the morning I had no headache. A dream for a guy like me.

I moved to Paris and worked at Le Chateaubriand for seven years which I spent discovering the wine regions and vignerons of the world. Even before I moved to Paris my idea was to one day make wine. I fell in love with this region because of the big diversity in grapes, climates and soils. It is like a big playground that I am just beginning to understand.’

Seb is a modest guy, his first vintage makes for an incredibly impressive debut.