After leaving the guys at Cantina Giardino we drove a few hours east to Puglia to meet Cristiano Guttarolo at his vineyards outside the town of Gioia del Colle.

We tried to play it cool, pretending we knew the way but got lost and ended up meeting Cristiano out the front of one of Puglia’s many abandoned service stations. He rocked up speeding, honking the horn of a new car (this time an old golden beetle) and was smoking a fag, which put us all at ease. A few of us jumped in his car and we headed back to his farmhouse for a quick aperitivo on the terrace before lunch.

It is always a nice surprise visiting Cristiano’s vineyards. Most think of Puglia as this hot, arid place but his vines sit at the heart of the Murge Plateau, a raised table of fossilised limestone, or carst terrain, some 430 metres above sea level.

The vines are battered by a constant breeze from the sea and at 12 noon it was cooler here than any other part of Italy we had visited on this trip. This breeze and the fluctuation between temperatures day and night lend Cristiano’s wines a freshness one does not associate with Puglian wine in general.

All was well as we warmed up with a couple of bottles of his ’13 Bianco Amphora, which had shed the puppy fat which marked it last time we tasted it and was drinking like some sort of pulverised limestone sports drink, offering refreshment in spades. There were only a few hundred bottles produced and a handful of them will be with us in London soon. 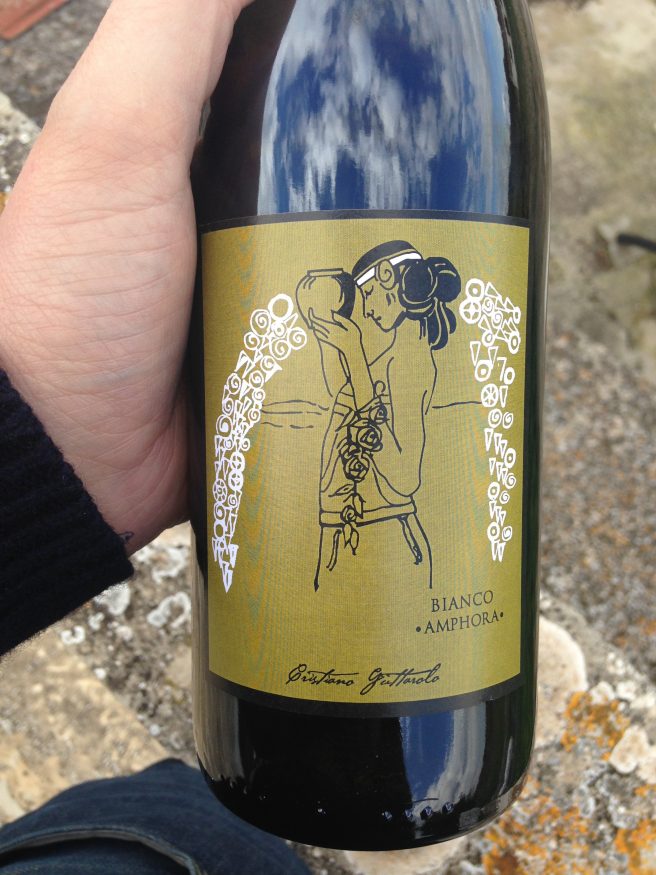 From there we set off to nearby trattoria La Locanda di Melograno, a favourite spot last year and we are happy to report it hasn’t changed one bit. There was capacollo, bufala and stracciatella, this wonderful herb gnocchi with tomatoes and ricotta salata and some killer veal sausages on the table and a couple of riffs on 2010 Primitivo in our glasses. The Joha was fleshier, with riper, deeper fruit, while the unnamed wine, which was aged half in amphora and half in steel was more detailed and perfumed with that wonderfully salty, slightly tart note we love in Cristiano’s wines. We chose a label for this wine from a bunch of drawings stuck on his fridge later that day and the wines will arrive in London soon.

After lunch we headed back to Cristiano’s to visit the vineyards, which even in the fading light are some the most beautiful you will ever see. He is now leaving some of the biodynamic practices he had adopted, having learned that often the soil here is best left to be. Such is the mass of wild flowers, plants and vegetables that grow here, their roots and shoots aerate the soil perfectly and the vines thrive. When they become too long Cristiano simply rips them out and leaves them in the vineyard and as they decompose they create a rich humus that feeds the soil. 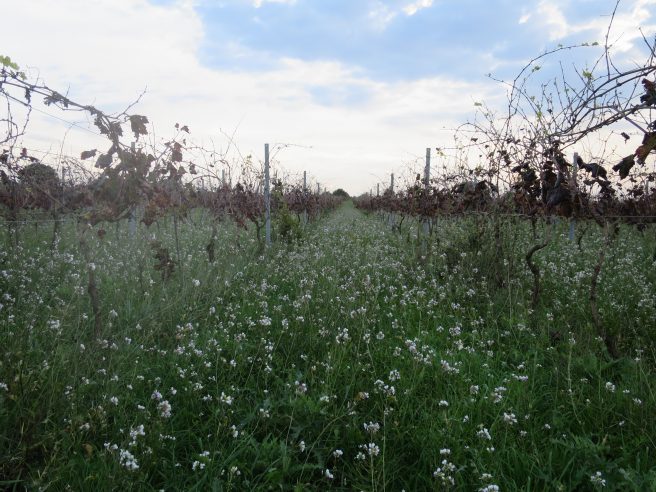 One thing you notice the more time you spend around here is just how much limestone there is. It litters the vineyards and is used in and around Gioia for churches, clocktowers and fountains and of course the walls which surround Cristiano’s vineyards and home.  It certainly seems to have a profound effect on his wines, lending his Primitivo and Negroamaro a minerality and savouryness we rarely associate with those grapes. 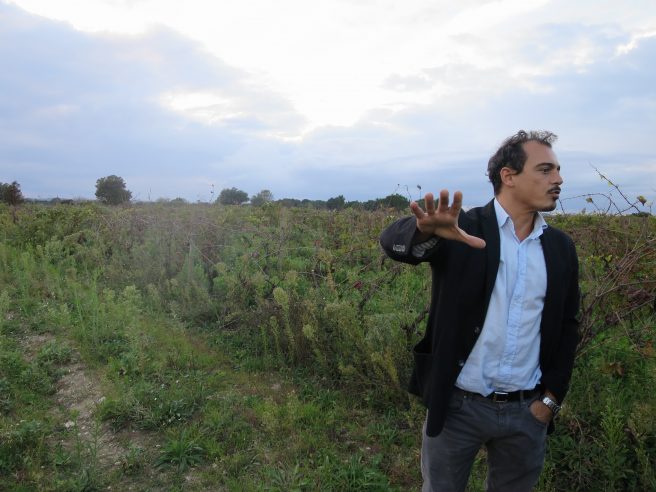 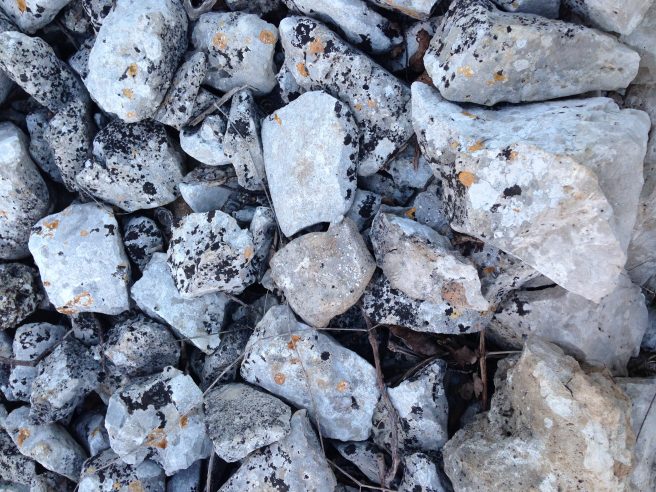 The vineyards are just teeming with life and we spent time grabbing wild rocket, fennel and fava to make a salad to go with dinner that night. 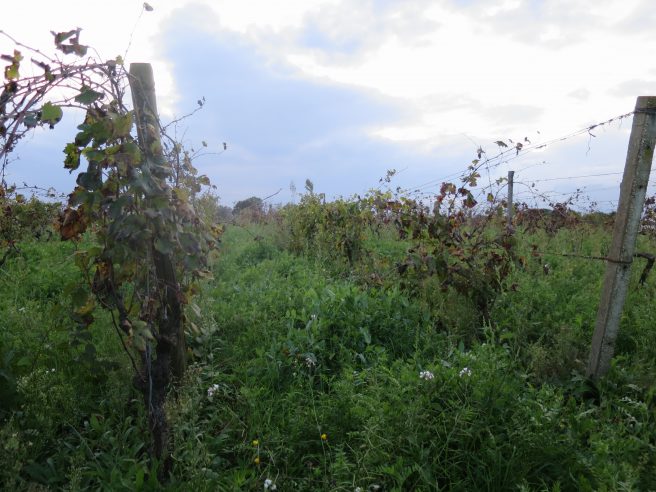 After finishing in the vineyards we headed into the cantina to listen to the ferments bubbling away in the amphorae room and to grab a few bottles to drink before dinner. 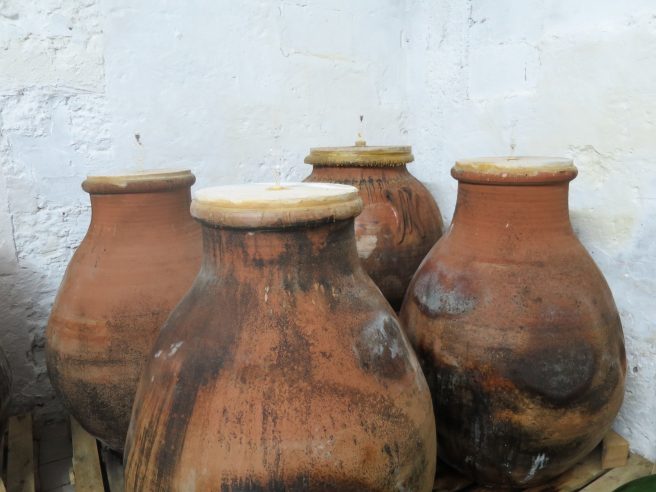 We decided on a vertical of Violet for aperitivo, looking at the 2005, 2006 and 2013 side-by-side along with a sparkling version Cristiano made by shoving a few grapes from a later vintage in a bottle of 2005 and sealing it with a crown seal. This is a wine that tastes like no other and with age develops a rusty hue, liqueur-like texture and a perfume somewhere between sea urchins and salted plum. While the 2013 is a baby and we have long loved the 2005, the 2006 stole the show, almost weightless and incredibly complex, unfortunately there is none for sale.

Being a young winemaker, Cristiano is always learning and he explained that although he has experimented with nearly every kind of container for ageing his wines he can see now that over time, they are merely a vessel for getting the wine from A to B. He relishes the differences that storing the wine in say, amphorae, compared to wood has on it in its youth, but after close to a decade he finds they all arrive in the same place, the loudest voice being the terroir. 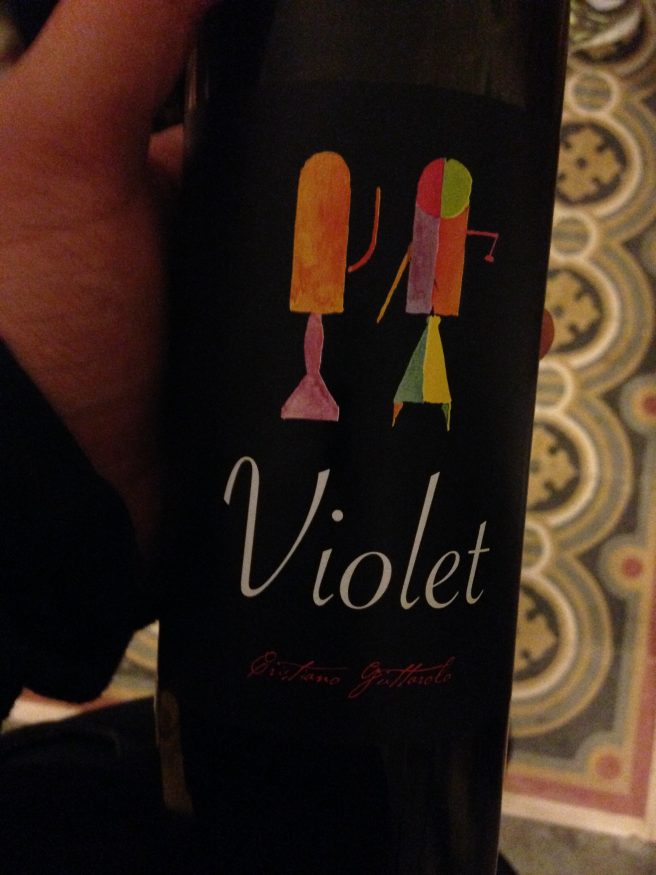 Violet is a wine that Cristiano like to have with his favourite food, anchovies from Cetara on the Amalfi coast. A jar was presented, a few of the guys begun filleting them and we enjoyed them with little more than a glug of Cristiano’s olive oil and a little rosemary from the garden. An insane combination. 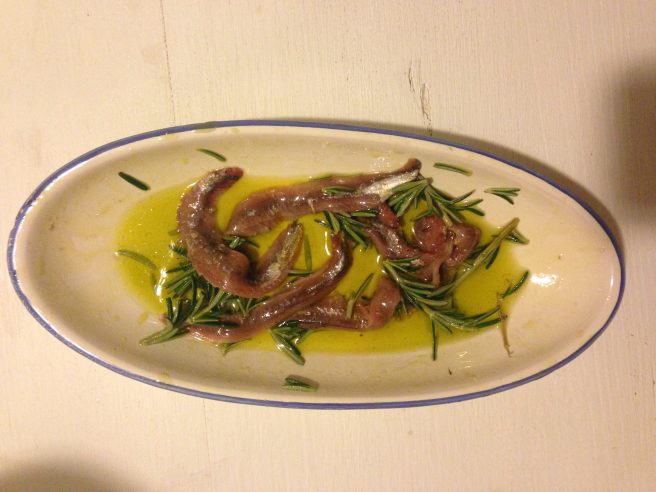 It seemed the day couldn’t get much better but Cristiano had other plans. We split in groups to orchestrate one of the craziest dinners we’ve even been involved in. A few of us headed out to the barn to light a huge fire, others stayed in the kitchen preparing pasta e fagioli and spaghetti con colatura di alici while the rest nipped into town to stop at the macelleria equina, or horse butcher, to grab some provisions for the evening meal. We were given the keys to the cellar and once we all assembled in the barn, we spent the night drinking, laughing and feasting on horse cooked in the flames of the fire dressed with little more than a little olive oil and sea salt, along with the foraged greens we’d collected earlier in the day. 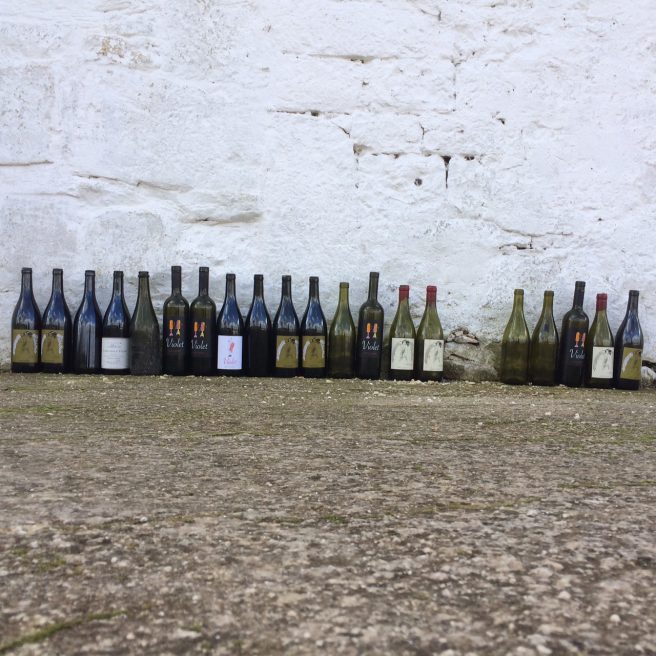 The bottles leant against the wall the following morning provide some clue as to what happened that night, a fitting end to a wonderful trip.

Grazie Cristiano, we hope to see you in London soon.